Pennsylvania’s reliance on budget maneuvers, or one-time actions to achieve balance, made it the only state to receive the lowest possible average grade of D-minus in the category for fiscal 2015 through 2019.

Among maneuvers Pennsylvania relied on were deferring expenditures and shifting revenues. For example, it reduced the expenditures in the fiscal 2019 budget by moving $120 million in managed care payments to the following year. In 2018, it transferred $530.4 million from special funds to the general fund.

In 2017–19, Pennsylvania also funded recurring spending with debt, including $1.2 billion of general obligation bonds sold in fiscal 2018. Proceeds were used to pay interest on previously issued debt, fund infrastructure maintenance, and support environmental initiatives. In 2019, the state covered debt-service costs with $70 million in proceeds from bonds issued the previous year backed by the Tobacco Master Settlement Agreement. Such an expense typically is paid from current-year revenues.

Its chronic shortage of cash was an underlying cause of Pennsylvania’s poor showing in two other categories. In legacy costs, the state averaged a D. Though it began to fund public worker pensions on an actuarially recommended basis in fiscal 2017, its failure to do so in previous years left the state with a pension funding ratio of 58 percent in 2019, 13 percentage points below the total for all states. For all five years studied, Pennsylvania failed to fund other postemployment benefits (OPEB), primarily health care, on an actuarially determined basis, and it began fiscal 2019 with an unfunded liability of $14.7 billion.

Pennsylvania’s C average in reserve funds reflected minimal balances in the general fund and Budget Stabilization Reserve Fund in 2017–19. The shortcoming was partially offset by the state’s disbursement and replenishment policies. Pennsylvania received B averages in transparency and budget forecasting. It lacks a consensus revenue forecast; while the executive branch prepares an estimate, the legislature does not have to adhere to it. 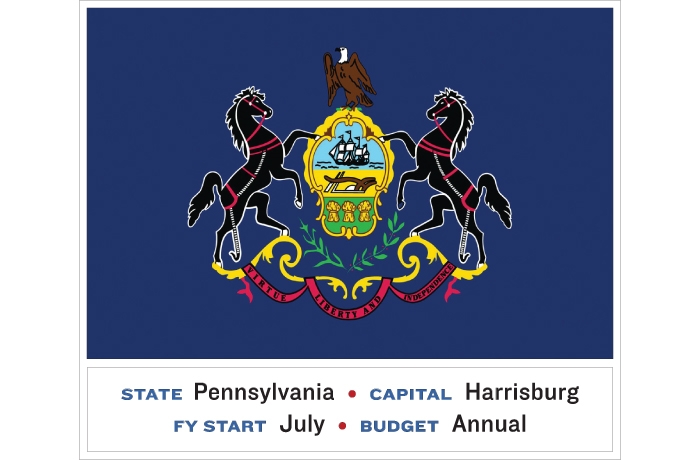