Oregon’s general avoidance of one-time measures to achieve fiscal balance won it a top A average in budget maneuvers, its best mark in five categories evaluated in fiscal 2015 through 2019. Over the period, the state did not defer recurring expenditures, use borrowed money, or sell assets to cover recurring expenditures. Only once, in the biennium that ended in fiscal 2017, did the legislature authorize a special fund transfer, moving some Racing Commission dollars to the general fund.

The state earned B averages in reserve funds, transparency, and legacy costs. Its two reserve accounts, the Oregon Rainy Day Fund and the Education Stability Fund, held almost $1.3 billion in 2019, equivalent to 12.7 percent of general fund expenditures. That compares with $391 million, or 4.8 percent, in 2015. The state has policies that guide the funds’ disbursement and replenishment, but it is one of thirty that fail to take revenue volatility into account in those policies.

In transparency, Oregon provided substantial budgetary information online and published tax expenditure reports alongside each biennial budget. But it did not report on deferred infrastructure maintenance costs. In legacy costs, which includes public worker pensions and other postemployment benefits (OPEB), primarily health care, the state followed actuarial recommendations for pensions and OPEB, with the exception of 2015, when its annual pension funding fell short of actuaries’ figures. The pension funded ratio in 2019 was 80 percent, 9 percentage points above the total for all states.

Oregon’s C average in budget forecasting reflected a lack of consensus revenue forecasting and multiyear expenditure estimates. The state’s quarterly forecasts are solely the product of the Office of Economic Analysis, which answers to the governor, and expenditure forecasts do not extend past the biennial budget. 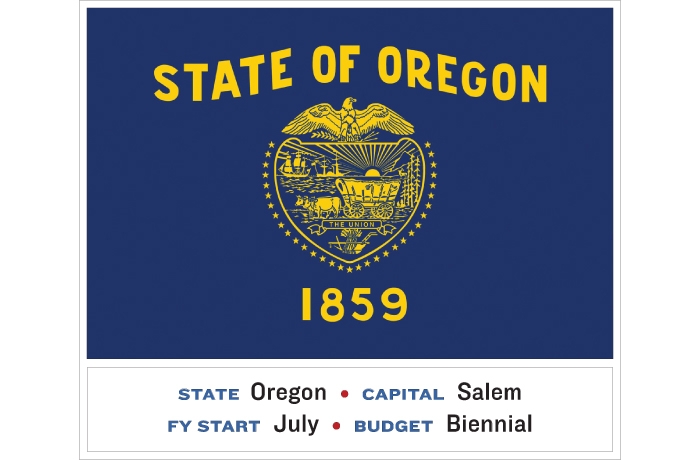