New York is one of only four states receiving average D grades in the budget maneuvers category for fiscal 2015 through 2019, along with Illinois, Kansas, and New Jersey. Despite an improving economy, New York’s use of one-time actions to achieve balance accelerated over the study period.

For example, beginning in fiscal 2018, New York began deferring recurring expenditures, a move it had avoided in the previous three years. In 2018, the state deferred an annual loan repayment to the New York Power Authority, extending terms through 2023, which temporarily reduced spending by $193 million. In 2019, it shifted about $1.7 billion in scheduled Medicaid payments to the next fiscal year.

The state has, however, been diligent in funding its pension plans in line with actuarially determined contributions. Its pension funding ratio in fiscal 2019 was 96 percent, 25 percentage points above the total for all states. New York does less well in funding other postemployment benefits (OPEB), primarily health care. It does not contribute to its estimated $91 billion OPEB liability in line with actuarial recommendations, instead covering current retiree costs on a pay-as-you-go basis. As a result, the state earned a B average in legacy costs.

In budget forecasting, New York was one of ten states with a top A average. The state is required to produce a three-year financial projection that includes receipts and disbursements. The logic behind its revenue projections is spelled out in the state’s Economic, Revenue and Spending Methodologies reports, which provide a detailed description of how revenue estimates for the upcoming fiscal year are calculated. 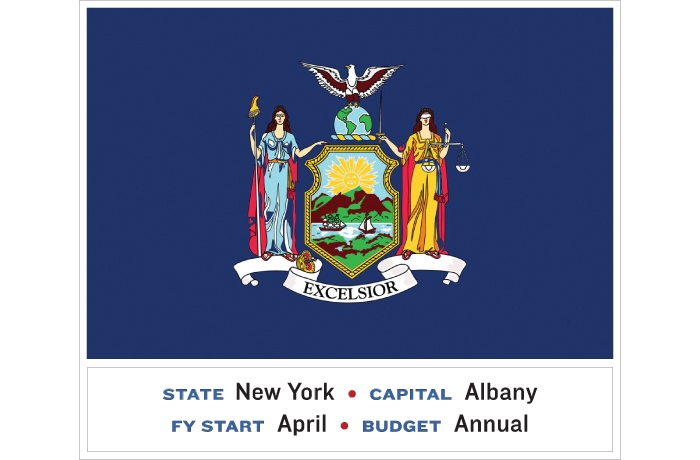