Indiana’s strong policies for its Counter-Cyclical Revenue and Economic Stabilization Fund, which acts as a buffer against downturns, helped earn the state a top A average grade in reserve funds for fiscal 2015 through 2019. The stabilization account is driven by a formula that calls for deposits when personal income in the state grows by over 2 percent in a year and that permits withdrawals when such income declines by the same amount. Indiana is also one of twenty states recognizing revenue volatility in rainy day fund policies.

The fund is not the only cushion. Indiana’s State Tuition Reserve protects school funding, and the Medicaid Contingency and Reserve Account assures payment of claims for health care. Balances in the three funds in fiscal 2019 totaled $1.4 billion, equivalent to 8.8 percent of general fund expenditures.

Cautious budgeting practices also have largely protected the state from turning to expenditure deferrals, revenue or cost shifts, or other one-time methods of masking budgetary shortfalls. These practices helped Indiana win an A in budget maneuvers, despite a refunding of highway revenue bonds in fiscal 2017 that postponed near-term principal payments until 2020.

Indiana’s two lowest averages were Cs, in budget forecasting and transparency. The forecasting grade was held down by multiyear forecasts that extend only through the upcoming biennial budget rather than the outlook of three years or longer considered a best practice. The transparency grade suffered from a lack of comprehensive, regular reporting on tax expenditures in 2015–17. Indiana also failed to report on deferred infrastructure maintenance costs. While its public worker pension funding ratio was 69 percent in fiscal 2019, 2 percentage points below the total for all states, its grade in legacy costs—where it averaged a B—benefited from actuarially based pension contributions and minimal other postemployment benefits (OPEB), principally health care. 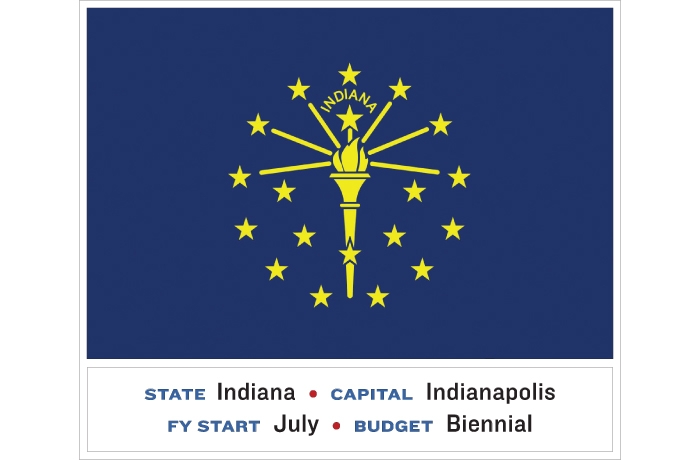