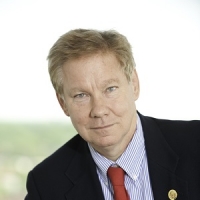 Thomas Davis was first elected to office in 1979, winning a hard-fought campaign to represent Mason District on the Fairfax County Board of Supervisors. This would be the first of twelve straight victories spanning three decades. In 1991, Mr. Davis defeated the incumbent chairman of the county board, and assumed the top elected office in Fairfax County, Virginia. Despite a severe economic downturn and a large county budget deficit, he was able to implement a number of reforms that resulted in Fairfax being named the best managed county in the country by Governing Magazine.

In 1994, Mr. Davis defeated another incumbent to win a seat in the US House of Representatives from the 11th Congressional District of Virginia. He was the first freshman in fifty years to be named a subcommittee chairman, taking the gavel of the Subcommittee on the District of Columbia. Mr. Davis earned national recognition as chairman of the National Republican Congressional Committee in 2000 and 2002, as he helped to maintain his party’s majority in the House of Representatives. Mr. Davis is known for his encyclopedic knowledge of political minutia, often instructing members of Congress on the electoral history of their own districts.

He has twice won the Political Trivial Pursuit challenge sponsored by the Hotline and National Journal. After the 2002 election, he was named chairman of the House Committee on Government Reform, gaining national prominence once again by chairing hearings on the use of performance- enhancing substances in professional sports. Other notable accomplishments include his hard-hitting but objective report on the federal response to Hurricane Katrina, his sponsorship of legislation giving the Food and Drug Administration authority to regulate tobacco, and passage of the National Capital Transportation Amendments Act, which authorizes much-needed capital reinvestment in the Washington Metro system.