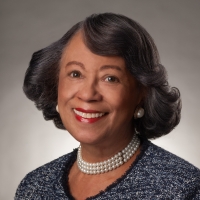 T. Eloise Foster is the first and only African American woman in the nation to serve as a chief state budget officer, having been appointed as secretary of the Maryland Department of Budget and Management in 2000. Although she left the position in early 2003, she returned in 2007 when she was appointed by Governor Martin O’Malley.

Secretary Foster served as the chief fiscal advisor to the governor responsible for development and management of Maryland’s $39 billion operating and $1.5 billion capital budgets, a personnel system governing approximately 79,000 employees and an employee and retiree benefits program covering more than 255,000 lives. As Budget Secretary, Ms. Foster led efforts to balance the state budget during the worst recession since the Great Depression and served as the chief architect of fiscal policies to eliminate Maryland’s long-term structural deficit, reduce spending, address unfunded liabilities, and protect the State’s Triple A bond rating.

During her tenure, Secretary Foster was the chief architect of proposals to reform the state pension system and revamp the health benefits program. She also proposed changes to make the state tax code more progressive and to close loopholes. In a January 25, 2013, editorial, Barry Rascovar of The Gazette noted that Maryland’s FY 14 sound financial plan “virtually eliminates the long-term structural deficit” and that O’Malley’s budget secretary, T. Eloise Foster, deserved huge credit for this accomplishment.

Previously, Ms. Foster served as assistant dean for business affairs and program development at the University of Maryland School of Medicine. Earlier in her career she served as a legislative officer for Governor William Donald Schaefer and as an analyst for the Maryland General Assembly.

Ms. Foster is an honorary lifetime member of the National Association of State Budget Officers and a former member of the National Forum for Black Public Administrators. She is a member of Alpha Kappa Alpha Sorority, and The Links, Incorporated. She has served on the Howard University Cancer Center Advisory Board, the Seton Keough School Board, and the Arts and Humanities Council of Montgomery County. Ms. Foster was named one of Maryland’s Top 100 Women in 2002, 2007 and 2010, qualifying her for entrance into the Circle of Excellence. In May 2010, she was honored by the Baltimore YWCA at their annual Leader Lunch as one of the organization’s Academy of Leaders. In 2012, she received the Shining Star Award from the National Organization of Black Elected Legislative Women and the Leadership and Service Award from the Women Legislators of Maryland Foundation, Incorporated. The Daily Record named her one of the Most Influential Marylanders of 2013. Howard University selected Ms. Foster as a 2014 Charter Day recipient. She received the Distinguished Alumni Award in the field of Public Service.

Ms. Foster currently serves as chair of the Maryland Supplemental Retirement Plans, a commissioner with the Washington Suburban Sanitary Commission (WSSC), and a member of the WSSC Retirement Plan Board of Trustees. She is also on the Board of Trustees of the Financial Accounting Foundation (FAF), serves as co-chair of the FAF Standard-Setting Process Oversight Committee, and was recently appointed to serve as Secretary and Treasurer of the FAF in 2021.