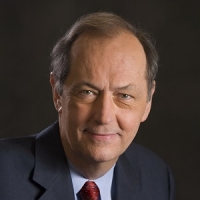 William W. Bradley is a managing director of Allen & Company LLC. From 2001 to 2004, he acted as chief outside advisor to McKinsey & Company’s nonprofit practice. He was a senior advisor and vice chairman of the International Council of JP Morgan & Co., Inc. from 1997 to 1999. During that time, he also worked as an essayist for CBS Evening News and was a visiting professor at Stanford University, the University of Notre Dame, and the University of Maryland.

Senator Bradley served in the US Senate from 1979 to 1997 representing the state of New Jersey. In 2000, he was a candidate for the Democratic nomination for President of the United States. Prior to serving in the Senate, he was a 1964 Olympic gold medalist and from 1967 until 1977, he played professional basketball for the New York Knicks, winning two NBA Championships. In 1982, he was elected to the Basketball Hall of Fame.

Senator Bradley holds a bachelor’s degree in American History from Princeton University and a master’s degree from Oxford University, where he was a Rhodes Scholar. He has authored seven books on American politics, culture, and economy, including his latest book, We Can All Do Better. Currently, Senator Bradley hosts American Voices, a weekly show on Sirius XM Satellite Radio that highlights the remarkable accomplishments of Americans, both famous and unknown.

Celebrating Public Servants on the Front Lines and Behind the Scenes
Event Coverage
Tuesday, May 4, 2021
T. Eloise Foster Brings Impressive Public Service Experience to Volcker Alliance Board of Directors
Press Releases
Friday, January 15, 2021
New Volcker Alliance Book Tackles How Government Can Meet the Challenges of the Century Ahead
Press Releases
Friday, May 1, 2020
Public Service and Good Governance for the Twenty-First Century
News
Friday, May 1, 2020