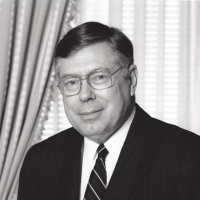 Distinguished service in both public institutions and the private sector has been the hallmark of Charles Bowsher’s notable career. On September 30, 1996, he completed a fifteen-year term of office as the comptroller general of the United States and head of the General Accounting Office (GAO). With a congressional mandate to audit, evaluate, or investigate virtually all federal operations, the GAO under his leadership became increasingly involved in some of the most important issues of the day, producing in-depth reports both at the specific request of Congress and on its own initiative.

Mr. Bowsher’s appointment as comptroller general by President Ronald Reagan in 1981 capped a background of experience in both government and corporate endeavors. He was associated with Arthur Andersen & Company for twenty-five years, except for a four-year period between 1967 and 1971, when he served as assistant secretary of the Navy for financial management. His work in that role earned him Distinguished Public Service Awards from both the Department of the Navy and the Department of Defense.

Since retiring as comptroller general, Mr. Bowsher has joined the corporate boards of American Express Bank, DeVry Inc., SI International, and the Washington Mutual Investors Fund. He was recently appointed as a public member of the Board of the National Association of Securities Dealers, which oversees the NASDAQ system and the over-the-counter securities markets. From 1997 to 2001, he was also chairman of the Public Oversight Board.

Currently, Mr. Bowsher serves on the advisory boards of the Public Company Accounting Oversight Board (PCAOB) and Glass Lewis & Co. From 1997 to 2000 he served on the Board of National Steel Company (now part of US Steel). From 1999 to 2001 he served on the Board of Newport News shipbuilding (now part of Northrop). From 1999 to 2003 he served as treasurer and trustee of the Washington National Cathedral Foundation. In addition to these and other directorships and board activities, Mr. Bowsher is a trustee of the Center for Naval Analyses, the United States Navy Memorial Foundation, the Logistics Management Institute, the Concord Coalition, the Hitachi Foundation, and the Washington Hospital Center. Bowsher also serves on advisory boards at several universities.