Truth, Integrity, and Budgeting: the Volcker Alliance Grades the States

This article was originally published by Bond Buyer on November 9, 2017.

Here we are, more than five months into fiscal 2018 for most states, and all 50 finally have enacted budgets. That it took so long to get the last two — Connecticut and Illinois — over the fence is a testament to the fiscal strains in these states and many others even as the nation experiences its third-longest US economic recovery since 1858.

Pennsylvania Governor Tom Wolf and legislators, for example, were unable to agree until October on a strategy to fully fund a $32 billion budget that was passed months earlier without the governor’s signature. Connecticut’s nonpartisan Office of Fiscal Analysis projects a budget deficit of as much as $4.6 billion for fiscal 2019 and 2020 after Governor Dannel Malloy signed a two-year, $41.3 billion budget on Oct. 31. And Oklahoma is trying to close a $215 million deficit following the state Supreme Court’s rejection of a cigarette tax in August. Provisions in the tax reform bill working its way through Congress may only exacerbate the fiscal pressure on states by limiting residents’ tax deductions or curbing some forms of municipal borrowing for capital projects or refundings.

Such fiscal stresses are reflected in the report on all fifty states released this month by the Volcker Alliance, Truth and Integrity in State Budgeting: What Is the Reality?. The result of more than a year of research by public finance and budgeting experts at 11 universities as well as by Volcker Alliance staff and consultants, the study grades states for the first time and offers a set of best practices in five critical categories: Budget Forecasting, Budget Maneuvers, Legacy Costs (including pensions and other post-employment benefits, or OPEB), Fiscal Reserve Funds, and Transparency. A second phase of the project is already in the works, covering fiscal 2018 as well as the three previous years.

After reviewing thousands of publicly available documents, including budgets, comprehensive annual financial reports, official bond statements, and other government filings, the Alliance graded the states on a scale of A to D-minus in each category for the fiscal years of 2015 through 2017.

Most states fared well in some areas. For example, 22 won an average grade of A over the period for their avoidance of one-time maneuvers to balance budgets and eight received an A in Legacy Costs (see table). But 19 — 38% of all states — received grades of D or D-minus in the category, reflecting the difficulty of meeting almost $2 trillion in unfunded pension and OPEB obligations nationwide on top of rapidly rising Medicaid expenditures and slow revenue growth. 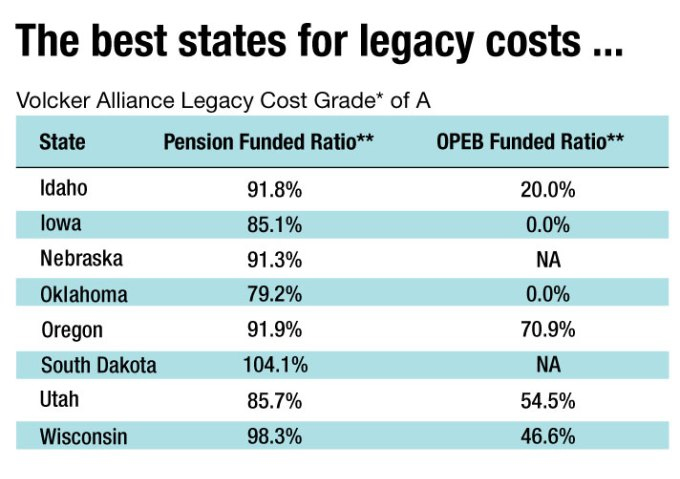 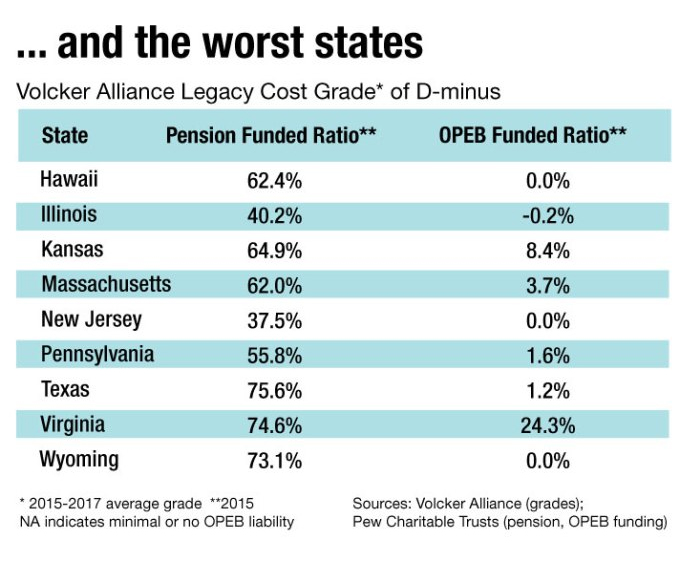 States receiving the lowest grade of D-minus in the pension and OPEB category (see table) included ones with well-acknowledged retirement funding challenges, such as Illinois, Kansas, New Jersey, Pennsylvania, and Illinois. But the group also included several with more stable finances, including Texas and Virginia (both with general obligation bond ratings of Aaa); and Wyoming, which has no Moody’s GO rating.

The common thread running through all nine D-minus grades was a failure in all three years studied to make the pension and OPEB contributions that actuaries said were required. Declaring a budget balanced while underfunding retirement obligations is sometimes unavoidable. But this practice shifts recurring costs to future generations and is not likely to be successful over the long term. (Under legislation passed in 2012, Virginia is scheduled to start making full contributions to pensions by fiscal 2019. Hawaii, meanwhile, is due to begin making its full annual required contribution for OPEB in the same year under legislation approved in 2013.

The Alliance’s study was about more than grading states. In the interest of sustainability in retirement obligations and other critical budgeting areas, the Volcker Alliance proposes states adopt these best practices:

States should use a consensus approach, including the governor, legislature, and, often, outside experts, to establish binding numbers for revenues and allow more time to focus on expenditures. States should also provide long-term revenue and expenditure estimates.

States should pay for expenditures in the same year they are accrued; avoid the use of debt and upfront premiums on financial transactions to cover recurring expenditures; and shift from cash-based to modified accrual accounting techniques already used in CAFRs. After its brush with bankruptcy in 1975, New York City was legally required to use generally accepted accounting principles (GAAP) for budgeting. It remains the only major U.S. government to do so and has avoided fiscal crises in the four decades since it was forced to adopt its current system.

States should consistently make contributions actuaries determine to be necessary. While some states may find it a crippling burden to fully cover costs of future benefits and past underfunding, they should consider committing to move toward full funding in the future. OPEB plans, when offered, should be adequately funded to ensure benefits can be paid when bills come due.

States should enact clear policies for withdrawals from rainy day and other fiscal reserves, as well as rules for replenishing spent funds and tying the size of fund balances to revenue volatility.

States should construct a consolidated budget website that includes full disclosure of such items as tax expenditures and the cost of repairing or replacing depreciated infrastructure.

In the Alliance’s report, we noted that Supreme Court Justice Louis Brandeis’s depiction of states as “laboratories” of democracy could not be more fitting for a study of budgeting practices in the 50 individual entities that make up America. The best practices for budgeting that we are advancing cannot increase states’ fiscal stability without the political will to adopt and apply them consistently for the long term. But the magnitude of states’ role in the U.S. economy demands nothing less.