The Volcker Alliance’s Truth and Integrity in Government Finance project's university research partners took a close look at the southeastern states’ fiscal health, budget transparency, revenue and expenditure forecasting, and debt management policies during the annual meeting of the American Society for Public Administration (ASPA) in Atlanta this month.

The ASPA conference featured a panel discussion, which I moderated, that brought together professors and graduate students from public administration programs at Georgia State University, Florida International University, and University of Kentucky who are currently examining budget processes in 15 states. The teams presented four papers that were based in part on preliminary results from a 29-question survey that researchers in the three schools, as well as those on eight other campuses from California to New York are conducting as part of the Volcker Alliance’s current study of all 50 state budgets in fiscal 2015, 2016, and 2017. Full results and findings of the study are expected to be announced later this year. 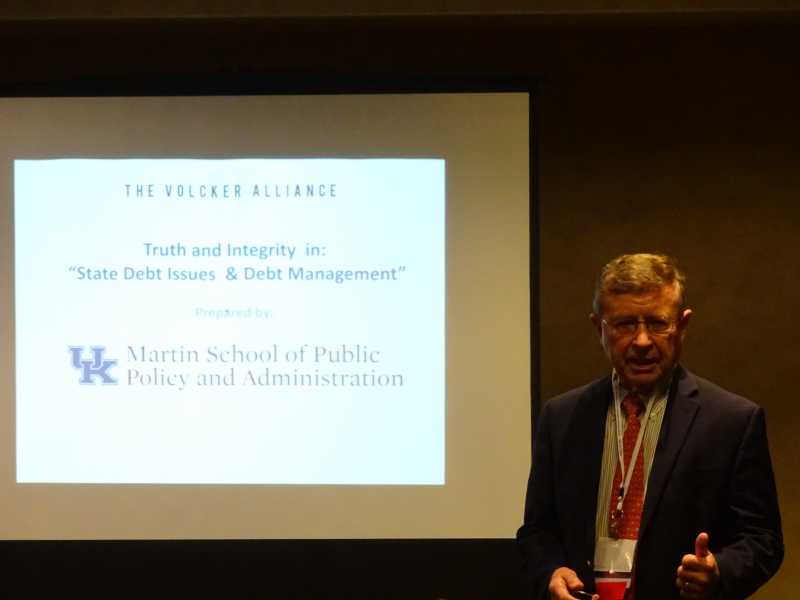 A common theme of all four papers was a call for greater visibility for many aspects of budgeting to help officials and citizens make better-informed decisions on fiscal policy. In “Truth and Integrity in State Debt Issues & Management,” Merl Hackbart (pictured above), Rhonda Riherd Trautman, Nate Kratzer, and Jason Ross of the University of Kentucky’s Martin School of Public Policy and Administration said that states’ debt management policies could be improved through fuller disclosure of infrastructure and capital investment needs. They found that only one of the 15 states—West Virginia—provides comprehensive estimates of deferred infrastructure maintenance costs in budget documents.

Based on the research questions the university teams are asking in all 50 states, Hackbart and Trautman noted that seven of the southeastern states failed at least once in 2015-17 to make their actuarially determined or recommended contributions for public-employee pensions. They suggested further research to determine whether states are including pension obligations as well as those for Other Post-Employment Benefits (OPEB), principally retiree health care, alongside debt in their management of long-term liabilities.

In “State Revenue Forecasting Practices: Accuracy, Transparency, and Political Acceptance,” Emily Franklin, Carolyn Bourdeaux, and Alex Hathaway, of Georgia State University’s Center for State and Local Finance, reviewed revenue estimation methods of the 15 states, finding that only two—Florida and Virginia—link their projections with macroeconomic trends and detailed explanations of how they affect the figures. “The rigor around Florida and Virginia is certainly appealing,” they wrote, recommending that other states in their forecasts should follow a “more expanded analysis of rigor, transparency, and accuracy.”

The same Georgia State team reviewed related transparency issues in a second paper, “Fiscal Disclosure and Accountability.” In the paper, the researchers found that while all 15 states have built fiscal transparency websites, many still lack critical data. For example, only two of the states—West Virginia and Maryland—disclose structural budget deficits, or long-term gaps between anticipated spending and revenue, “in any kind of concrete, systematic way.” They also recommended that states include long-term obligations, including pension and OPEB funding needs, in multi-year forecasts made available to the public.

Disclosure of structural budget deficits were also discussed by professors Hai (David) Guo (pictured below) and Howard A. Frank of Florida International University’s Steven J. Green School of International and Public Affairs. In their paper, “An Assessment of Southeastern Fiscal Health,” Guo and Frank said that while such imbalances have been a concern for policymakers and academics since the early 1990s, there is still “no universally recognized definition” of the term, which may include the effects of economic cycles as well as the states’ long-term spending and revenue trends. They also asked whether states’ tax systems are keeping up with the rise of internet sales and the sharing economy. This “raises the question of whether the state revenue structure is obsolete,” they said. 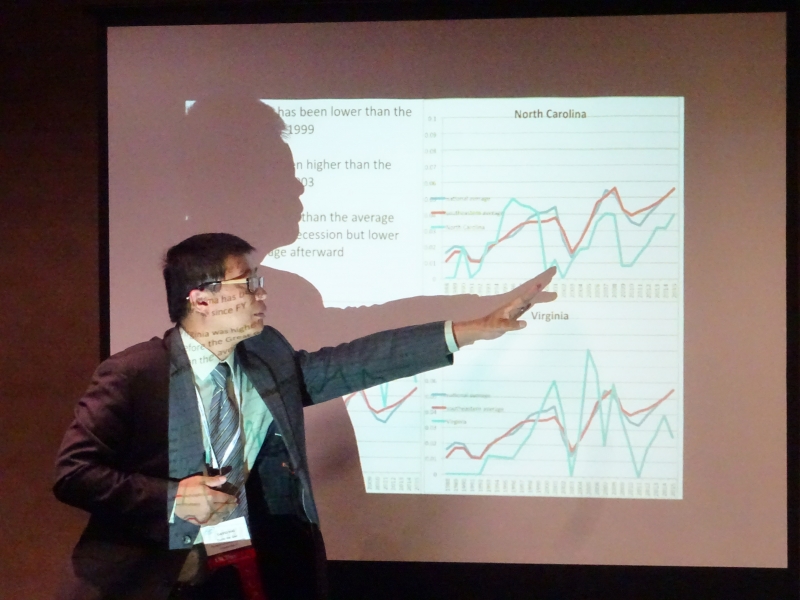 William Glasgall joined the Volcker Alliance in January 2014 as Program Director of the Alliance’s State and Local Accountability and Improvement programs. Previously, he was Managing Editor at Bloomberg News, overseeing coverage of state and local government and financial news that won numerous awards from the National Press Club Foundation and other organizations.
Read more
Learn More
Topics
Public Finance