This blog was originally published June 13, 2017 by Bond Buyer.

The financial stresses roiling Illinois, which is heading into a third consecutive fiscal year without an enacted budget, are just a super-sized version of similar strains being felt in statehouses across the U.S.

That should be a red flag for investors in state and local bonds, who have seen yields on tax-exempt, 10-year municipal debt tumble this spring to their lowest point since November 2016. It should also stand as a warning call to governors and legislators to scrutinize the weak spots that the Volcker Alliance has flagged in preliminary findings from our current research on all 50 states’ budgeting processes for fiscal 2015 through 2017.

States need to address these weak spots because the task of producing balanced budgets has become infinitely more difficult in recent years and is likely to become even more so. (Forty-nine states, including Illinois, require balanced budgets, and Vermont, the lone holdout, follows the others’ practice.) 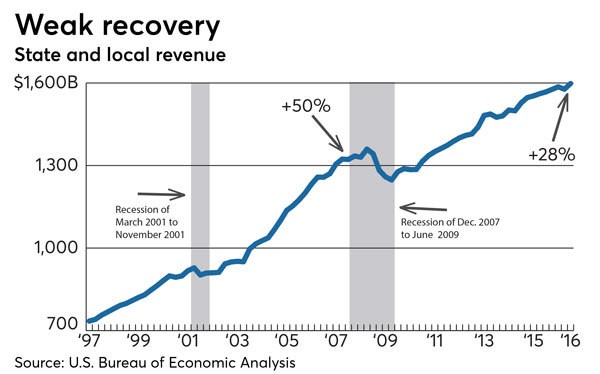 For one thing, state and local revenue has risen by only 28 percent since the end of the last recession in 2009, little more than half the growth recorded over the eight years following the previous recession in 2001, U.S. Bureau of Economic Analysis data show (see chart). The revenue squeeze in states will increase dramatically on states if Congress replaces Obamacare with a new health care law that may slash $880 billion in federal subsidies for Medicaid, the federal-state program for low-income Americans.

State revenue is also becoming more volatile, according to the Nelson A. Rockefeller Institute of Government, putting pressure on governments to improve their forecasting methods while setting aside extra cash for rainy day fund reserves. (Standard & Poor’s recently downgraded $22 billion in Massachusetts general obligation debt, the first such action by a major credit rater since 1990, largely because the state has failed to replenish its rainy day fund quickly enough.)

Adding to the pressure on some states is the rising cost of pensions and health care for retired state workers. Michael Cembalest, chairman of Market and Investment Strategy for J.P. Morgan Asset Management, has estimated that Illinois, for example, would have to allocate 40 percent of state revenue over the next 30 years, instead of the 20 percent it pays today, to cover its unfunded pension and retiree health care liabilities, defined contribution plan payments, and interest on its bonds. New Jersey and Connecticut are not far behind.

Indeed, preliminary findings of the Volcker Alliance’s survey of state budget practices has found that about half failed to fully make last year’s payment for pensions that actuaries determined was necessary, while most states fail to pre-fund even modest amounts of retiree health care obligations. The Alliance’s budgeting survey, which is being carried out with public-finance professors and graduate students at 11 U.S. universities, also found that in fiscal 2016:

Practices such as these prevent policymakers—and citizens—from getting the true picture of their states’ fiscal well-being and can lead to budgeting that lurches from crisis to crisis with little time to recover in between.

Illinois’s inability to pass any budget at all has defied a 32 percent gain in the state’s economic health since the Great Recession ended in 2009, Federal Reserve Bank of Philadelphia data show. That squandered opportunity helped push yields on 10-year Illinois general obligations above 5 percent last week, with the bonds carrying a near-record yield premium over AAA rated obligations. You can’t find a clearer warning to fix the state’s fiscal mess, and one that other statehouses risk ignoring at their own peril.

Links
This blog was originally published by Bond Buyer.
Share